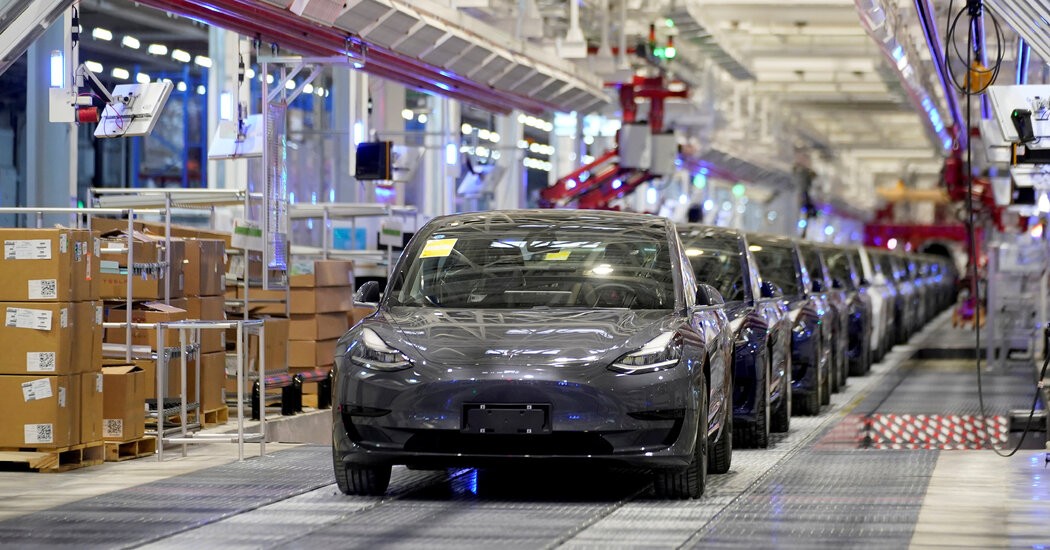 When the coronavirus pandemic forced businesses to close this spring, the auto industry was hit particularly hard. North American auto plants that typically churn out more than a million cars a month produced fewer than 5,000 in April.

While airlines and other industries continue to struggle, automakers are now enjoying a clear upswing. Last month, some large automakers reported that sales in the United States were up from the previous September. If this pace of sales continues for a year the industry would sell more than 16 million cars and trucks, up from an annualized pace of 13 million in June.

This recovery is being led by Tesla, the electric car pioneer. On Friday, the company reported record deliveries in the third quarter as steady growth in China and Europe more than offset weakness in the United States. The company does not provide a geographic breakdown of its sales.

The automaker delivered 139,300 electric cars in the third quarter, an increase of more than 50 percent from the second quarter, when the pandemic forced Tesla and other automakers to close factories and many consumers stayed away from car dealerships.

The company said it produced 145,036 vehicles in the third quarter, an increase of about 76 percent from the second quarter. The automaker was forced to close its factory in Fremont, Calif., from mid-March to mid-May because of the pandemic. It was able to rely on a new factory in China that reopened after the country brought the outbreak there under control.

Compared with a year earlier, Tesla’s deliveries increased by more than 40 percent in the third quarter.

While Tesla clearly shone during the quarter, other automakers also did better than they had earlier in the year. Total sales of new cars and trucks fell about 11 percent in the third quarter, but manufacturers reported year-on-year sales increases in September, the final month of the quarter. Toyota Motor, for example, said its sales of light vehicles rose 16 percent last month.

Some of the recent increase in sales was clearly driven by pent-up demand from people who had to put off car purchases at the height of the pandemic. In addition, inventories of some models were low because automakers ceased most production for two months.

Now, sales are rising in part because of the pandemic’s impact on families and businesses. Some people are spending money on cars that they are not spending on travel, restaurants and entertainment. Others are buying a new car because they are trying to avoid trains and buses, or because they have moved to suburbs and small towns from cities.

General Motors said its sales performance improved in each month in the third quarter and in September exceeded the year-ago total. “While the economy has made a substantial rebound in the third quarter, retail auto sales have been even more resilient,” Elaine Buckberg, G.M.’s chief economist, said in a statement. “Super-low auto loan interest rates have boosted retail auto sales, yet more strength comes from pandemic-induced demand.”

But it is not clear how durable the industry’s recovery will be. Credit is tightening for some lower-income buyers, and a surge in coronavirus cases could set the industry back, said Michelle Krebs, executive editor at Cox Automotive, a market research firm. “The virus is not yet under control, and now the president and the first lady having it — it creates a lot of attention for consumers.”

For Tesla, the quarterly sales record was just the latest in a string of accomplishments. The company’s stock has risen so much in recent months that it is now by far the most valuable auto company in the world.

Yet, despite the jump in sales, Tesla’s stock closed down about 7 percent Friday on concerns about whether it will hit its target of selling 500,000 cars this year. Through the first nine months of the year, it has delivered 318,000 vehicles. To reach its goal, it will need to sell more than 180,000 cars, which would be another record.

Joseph Spak, an analyst at RBC Capital Markets, said in a report to investors that it was “not an unattainable goal” but achieving it now “seems increasingly difficult.”

In the longer term, though, Tesla’s ability to sell nearly half a million cars a year represents a profound shift for the company. A little over a year ago, Tesla was scrambling to raise money and quell fears that it might run out of cash.

But Tesla has ramped up production at the factory it opened at the end of last year near Shanghai. The company also introduced a new car, the Model Y, a sport-utility vehicle that is roomier than the Model 3, the compact sedan with which it shares many parts.

The company is also building a third car factory in Germany, near Berlin, that is scheduled to open next year. And it has announced plans for a fourth plant near Austin, Texas, to produce its angular, futuristic electric pickup, called the Cybertruck. Last month, Tesla’s chief executive, Elon Musk, said the company has taken in “well over” half a million orders for that vehicle.

All of that means the company could reach sales of one million cars a year in the near future. That total would have been hard to imagine just a few years ago and suggests the company is no longer an upstart in an industry where most companies have been around for decades. With sales around a million, Tesla would join the ranks of the world’s established automakers.

“Tesla is the E.V. market right now,” Ms. Krebs said. “It’s still a tiny part of the market, and they are going to face more competition, but they are now well established.”